Returning to the streets of London for the second time, GMFA’s Him.Me.Us. campaign is on a mission to increase awareness of HIV testing and representation among gay and bi black British men.

17 black gay and bi men were assembled for the campaign, shot by Londoner Benjamin Glean. Glean got involved with the project after a chance meeting with Liam Murphy from men’s health charity GMFA.

Glean told The Queer Review, “I met Liam and was immediately interested in what they were doing. I worked on the launch of Outlife, a digital resource for mental health for the LGBTQ+ community. Then the opportunity to work on Him. Me. Us. came up and I was on board right away. The stats speak for themselves. Black men are disproportionately affected by HIV for a number of reasons.” 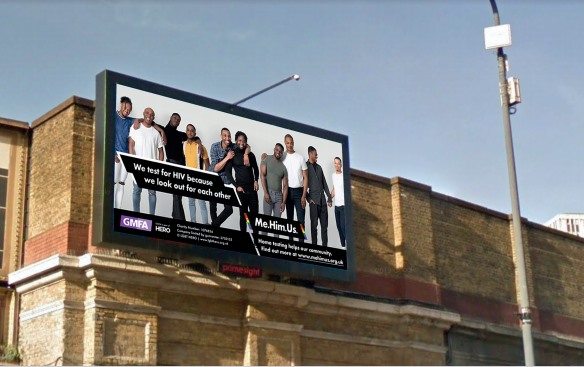 “It didn’t really hit me until I stepped on to the set with the entire group,” Glean continues. “I felt a real sense of shared power and connection with everyone involved. I’ve shot fashion, portraits and high profile events for a decade now and this is one of the my important shoots I have ever undertaken. A privilege and a blessing to be involved.”

Head to GMFA’s wbsite for more information along with advice and resources for HIV test at home and at clinics in England.