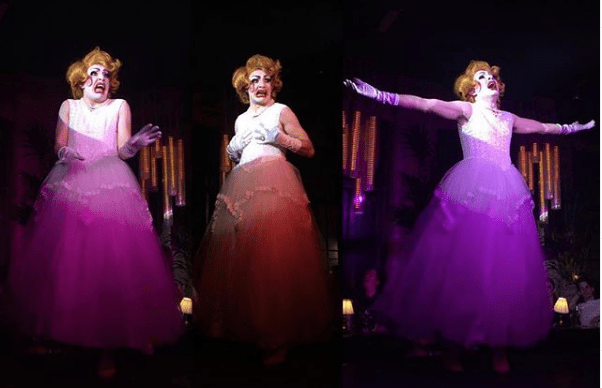 At exactly 8:40, on a recent Wednesday evening, the first queen took to the stage of The Glory. For just over a month in the spring, London’s drag queens and queer performers of every ilk descend here once a week to show what they can do. The Glory is the perfect venue for this showdown. This little gem of a place, nestled between Hoxton and Haggerston in East London, is far enough from the hustle and bustle of the West End, and even the hipster vibe of Shoreditch, to be able to get away with pretty much anything. And so when heading for the Glory one is never exactly sure what to expect. On any given night of the week, the two-floored super pub can surprise its patrons with an impromptu cabaret, stand-up comedy, a drag act – in short anything you could ever dream of expecting from a little slice of queer paradise.

But Wednesday evenings in May and June are special. This is LIPSYNC1000, a fabulous extravaganza, which, despite the laid back vibe, is a fierce competition, with a £1000 prize at stake. The event is free, and the small ground floor of the Glory fills quickly – if you’re in the know, you arrive early to secure a spot close to the stage. If you’re new to this, you’re likely to arrive too late and spend the evening outside, queuing with the rest of the mere mortals. Think Studio 54 in the 70s, but on a budget.

Even though the show is meant to start at 8, punctuality is far too mundane a concept to be followed at The Glory. The show starts when the stars are ready, and in this case the stars are two fabulously flamboyant queens, one of which is last year’s LIPSYNC1000 winner, Rhys Hollis. Rhys’s co-hostess, Sue Gives A Fuck, declares graciously that everyone is warmly welcome, regardless of their sexuality or gender identity. ‘Everyone is welcome here. And let’s be honest, if you’re straight and white, you’re welcome everywhere’. The zingy Tee is met with a rowdy thunder of cheers, and the show can truly kick off now.

For the next two hours, the little stage becomes a vehicle of queer expression, which is breath-taking in its diversity and richness of talent. Fascinating is also the choice of songs for the lip-sync: the evening is a mini journey through decades of drag iconography. It’s thrilling to see that millennial queens continue to be inspired by the likes of Judy Garland, Julie Andrews and even the unsinkable Mommie Dearest herself – yes, Joan Crawford makes an appearance. From Shania Twain to Madonna, Beyoncé, Lana Del Rey and Florence Welsh – the acts represent every corner of camp decadence. And in the end, it is the good old fashioned super-camp, the over-the-top flamboyance that wins. Annie Pics brings the house down with her spectacularly hilarious rendition of Julie Andrews’s (NOT) Getting Married Today.

Annie Pics is a star. She has a flaming ginger wig, full red lips and a white dress reminiscent of Baby Jane. Her personality shines through the makeup and the stage lights, to reach even the furthest corners of The Glory. She is the winner, and she is definitely not getting married today, because, let’s face it, why would someone as fabulous ever need to?