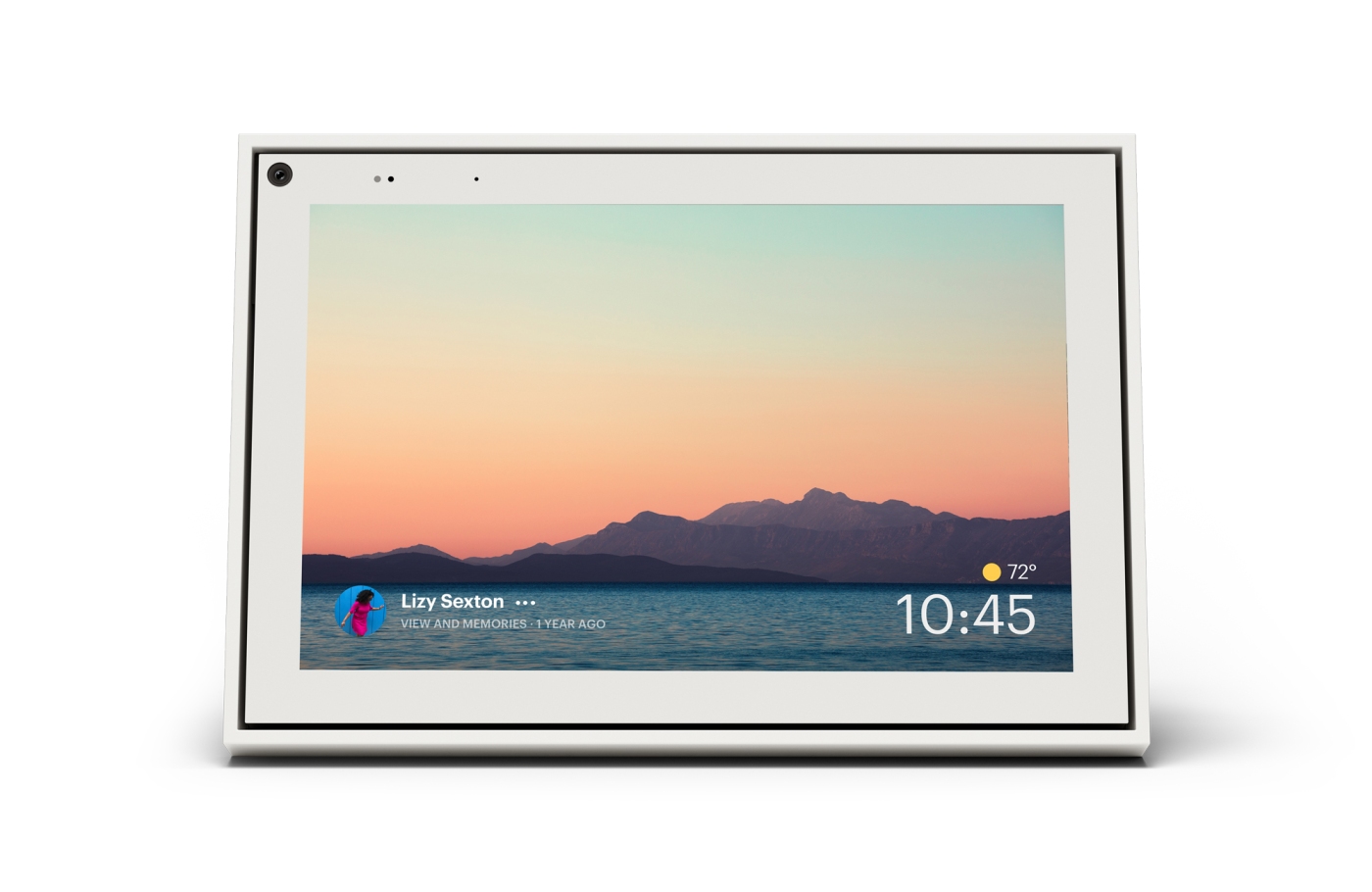 Facebook Portal has hit the market with a new range, as the social media giant continues to pivot into smart-home-tech and steal some market space from Apple, Google and Amazon. Portal isn’t simply a videophone (you’ve got the Beyonce song in your head now haven’t you?), there’s more to it, but that’s the core of its function. A smart, sleek and user-friendly way to video call friends and family.

And the new Portal’s are pretty slick – available in a range of sizes from the ‘picture frame’ Portal (10 inches) and Portal Mini (8 inches), to the larger Portal+ (15.6 inches for the real size queens). The Portal+ is pretty damn sexy too – designed as more of a statement piece for your room.

The Portal and Portal Mini come in black or white finishes but the display version of the white was showing signs of wear (you know the way an all-white piece of Ikea starts to look tattered on the edges after a while?). They’re boxy too – those edges might be a little dangerous for the kiddies. The new model sees the speaker moved to the rear, discreetly hidden from view, a 13MP camera and omni-directional four-microphone array – to catch sound and help minimise room noise on calls.

They all come with a solid, physical on/off switch for the camera that flicks with a pleasing click sound. Facebook know there are concerns about having cameras and microphones loose around the house, and have had privacy issues in the past, but the on/off switch feels like an attempt to mitigate that. You have the option of switching the microphone on independently, or switching both camera and microphone on. So there’s a level of control that feels physical, real and reassuring.

And the camera is pretty solid. Powered by an AI that will pan and zoom the image to make for a better calling experience it’s a step up from the original model. The tracking worked pretty well in the demos, although occasionally it couldn’t make up its mind (like a camera’s autofocus when it gets confused about what you’re looking at). Facebook repeated mentioned that the tracking was designed with “Hollywood cinematographers” but, seriously, it’s framing a picture not making Lawrence of Arabia. The microphone adjusted for room noise and kept voices clear. The display also adjusts to the ambient light of the room too to help make sure your video-call is as clear as possible. The screen resolution is solid but unremarkable, but then, this isn’t an iPad, you’re not going to be holding it up close – you’ll be looking at it from a meter or more away.

Facebook keeps pushing the experience as being “like you’re in the same room” which is just PR spin. The audio quality is good, but it’s still coming from a single speaker so lacks the depth of true voice and the video quality is solid. It’s only like being in the same room if you routinely shove your friends in small boxes (but hey, if that’s your fetish we don’t judge)!

But is this a smart home hub? Not yet. While Portal has Alexa, Messenger, WhatsApp, Youtube and Spotify integration you’re probably not going to want to trade in your Sonos etc just yet. At the moment you still need a Facebook or WhatsApp account to contact people (but apparently that will change soon).

Which brings us to Portal TV, the TV top camera with eight-microphone array (and a speaker, but you’ll probably never use it as your TV speakers will do most of the work). The camera comes with a physical shutter (similar to the Echo Show 5) to give you that extra sense of privacy. The actual image quality will really depend on your TV size as the same 12.5MP camera image will be scaled up or down to fit your screen.

Portal TV also gives you the ability to watch programmes with other people via Messenger video call – giving you a screen-in-screen display. I like the idea of bringing communal viewing back, even if you’re not physically in the same room – it’s a step in the right direction.

The next fun feature on display is Storytime – an AR filter app that gives you all the SnapChat-style fun on your big screen. Apart from all the usual filter shenanigans, there is a storybook feature that is going to be a big hit with parents. An interactive children’s storybook that blends the reader with animations. At the moment you can only use Storytime on Messenger video calls (not WhatsApp etc). Only aimed at children’s stories now, my request for a 50 Shades of Grey-filter was brushed off pretty quickly.

Facebook have included a raft of privacy features (you have to opt out of data collection but at least you have the option, you can view and delete your call data and can set Portal not to store any interaction data if you want). Facebook promise that people won’t be reviewing your calls for quality etc.

As a piece of tech, Facebook Portal (in all its versions) seems good at a fair price point (all these observations are being based on a demo view, not a real-world experience and stats provided by Facebook). Portal, and other similar devices, free you up from having to either hold your phone all the way through a video-call or find a place to perch it.

But do you want Facebook to have a camera and a microphone in your house? Well that depends on your relationship with big data and whether you trust them? For some that will be the ultimate decider and Facebook have gone to great lengths to make you feel secure with Portal. I guess it will just come down to how much faith you have in them.